Charting your own course.

Artists featured in this article

It’s not really an option for most professional tattoo artists. Those who rise to fame often come from a legacy of tattoo shops with traditional apprenticeships, rigorous training and a guiding mentor along the way. But for Hart & Huntington artist Blanco, that wasn’t quite the case.

It was his grandma who had encouraged him to first pick up a pencil. One of his earliest memories is watching her do oil paintings at the local park by her home. He would sketch Pac Man comic strips when he was 10. Then during the 80s, when hip hop first made it onto the scene, he started to get more serious about it all.

I had friends who would dance, and I’d draw logos for their clubs. Then I picked up a spray can and started doing graffiti. It was just part of the hip hop culture.

Blanco became a professional airbrush artist after that, renting out a small space in a Pico Rivera, CA swap-meet.

Growing up, I didn’t really think much about tattoos or tattooing as a profession. I wasn’t even interested in getting one myself. But being artistic, my friend had me tattoo him when we were just 15 with a prison rig!

After that, his brother took him to get his first tattoo at Bert Grimm’s tattoo shop in Long Beach. Blanco added more work to his body as time went by, all the while becoming more immersed in the tattoo culture.

At the time, I thought I wanted to get into computer artwork, but changed my mind once I saw behind the curtain in a tattoo shop. I’m so thankful I chose this direction instead. I don’t think I would’ve been happy in an office!

The owner of that shop, The Electric Pencil in Whittier, wanted the shop painted and heard about his creative abilities.

He ended up trading me the gig for a tattoo.

But like most artists today, Blanco didn’t do a traditional apprenticeship.

I wish I did, but having friends at that tattoo shop taught me a lot. I had a good network of artists to guide me. I’d airbrush their cars, they’d give me tubes and needles and encourage me to tattoo my artwork instead of spray painting it.

My airbrush customers heard I was tattooing and started coming to me for ink instead. It was like the stars aligned.

He transitioned seamlessly from spray painting into the tattoo industry.

Even though I don’t have those hard-knock stories from an apprenticeship to pass onto the next generation of artists, there were two main lessons I always try to share with aspiring artists: the importance of sanitation, and how to do great shading.

Blanco is a whiz at Black and Grey. He remembers when the style first came on the scene and artists were just figuring out how to perfect the graduated look.

It was as simple as adding water, but it’s such an important skill to hone. That and never cross-contaminating with pre-used ink. I learned that the hard way back in the day.  I ruined one of my artist friend’s fresh pot of ink that he’d been preparing for seven hours by pouring the old stuff into it. Man did he yell at me!

Some things are better learned from experience than by textbook. By messing up and making it right.

I’ve always been competitive in nature. I strive to do better than my last attempt. I think that’s allowed me to learn a lot over the years.

It’s also what’s allowed him to be one of the best Black and Grey artists in the business.

My style hasn’t changed a whole lot over time, but I’m always trying to compare myself to other artists and match their level, to constantly improve and do the best possible work within my style.

Now that more people come to him asking for color, he’s created his own signature look: A Black and Grey/color hybrid.

I never did a lot of color in my early career, but my signature of sorts now is to incorporate my Black and Grey into almost every color piece I do, which is what makes my style look a little different than others.

But regardless of what his customers ask for, he always set his sight on one thing: making them happy.

If someone comes to me with an idea and I accomplish it, or they tell me it came out better than they expected, I’ve done my job.

That can be tough for people stopping in to get their first tattoo.

A lot of people come in and want everything tattooed at once – a collection of things that remind them of their kid, what they do for a living. How I explain it to them is, “Let’s say when you were young, you used to go fishing with your grandfather, and you took your dog named Spot with you, and you drank root beer on the boat, which was always dirty …” You don’t need to have all of those things tattooed to commemorate that fond memory. Instead you could do a simple a fishing pole with a worm on the hook and put Gramps across it. It’ll mean the exact same thing to you when you’re done, but it’ll look so much better.

It’s about guiding the customer to highlight one or two things, not all of them.

Tattoos are a footprint, an impression, not your whole story. It can be meaningful without having to be overly complicated.

Most of the time, it’s about the experience of getting a tattoo versus the finished piece that makes the biggest impression.

I once had a lady come to me for a tattoo at Hart & Huntington. She was in a wheelchair and had an illness that made her shake real bad. We were worried she wouldn’t be able to sit still enough for the tattoo, but as soon as the needle hit her skin she stopped moving. It was crazy! This was the first opportunity she’d had in a long time to stop shaking involuntarily. After we were done, she was so appreciative and happy. It was incredible to be a part of that.

One of the main reasons why H&H is full of such talented artists is the way the shop gives them the platform to perform at their best and do their best work.

The best part about being at the H&H shop in Vegas is that it’s a custom shop without being bougee, a place with a sense of humility. They let you be you, they’re not trying to force you to be a vegan Buddhist who only tattoos mandalas. We have freedom of expression, and I think that’s what allows us to thrive and make our customers so happy.

Blanco moved from California to Las Vegas back in 2005. He’d read about Hart & Huntington in a magazine when they were getting ready to open up their casino shop. So when he was settled in, he stopped by to see if they were hiring.

I honestly didn’t think anything would come of it. It was my dream job, but I had already auditioned for another shop on the Strip and started working there. Eventually, H&H allowed me to start covering shifts. Now I’m one of the oldest artists there!

He may not have arrived at H&H like most artists do, but he’s certainly made a name for himself. More than that, he’s made a career out doing something he loves.

H&H is a good brand. People know to come to us for quality work. It’s what’s allowed me to raise my whole family while being here. It’s allowed us to put food on the table, support three kids, take vacations together. I live the life of the starving artist without ever starving. My whole story of tattooing started with my last child, now I have two grandkids on the way. I don’t think there are a ton of people out there who can say that.

I’m an old man now and people still want to get tattooed by me! It’s so gratifying to do something for a living that can make someone else happy. That’s the most important thing to me in my career now and back then when I started.

And it seems like there’s no limit to what Blanco will achieve next. He’s always reaching for the next rung.

I want to be remembered for something I haven’t accomplished yet – a certain quality of tattoo I haven’t achieved, or just being an artistic name people remember as synonymous with my style and good quality.

His path might not have been traditional, but it’s certainly impressive. 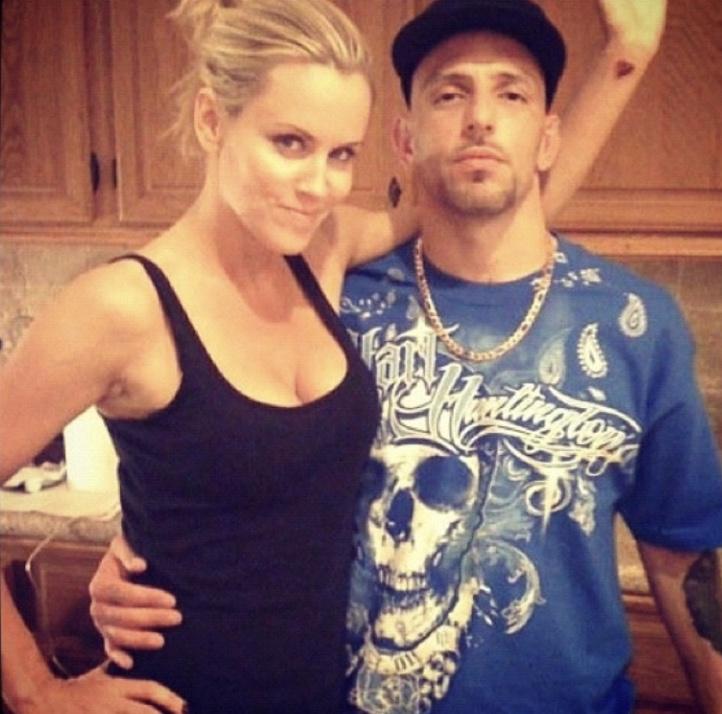 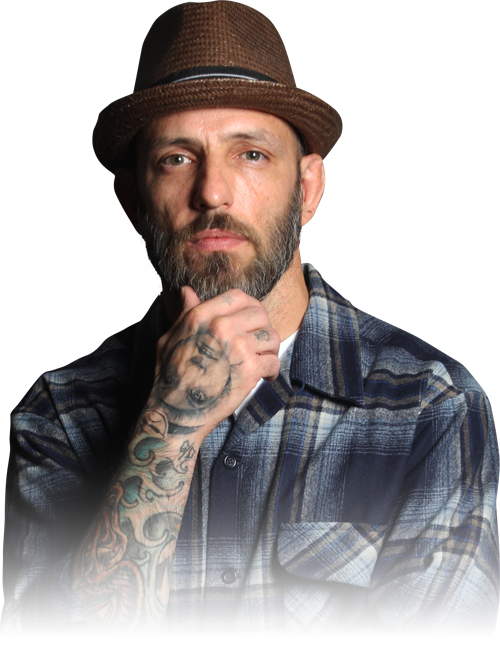 Get a tattoo from Blanco. 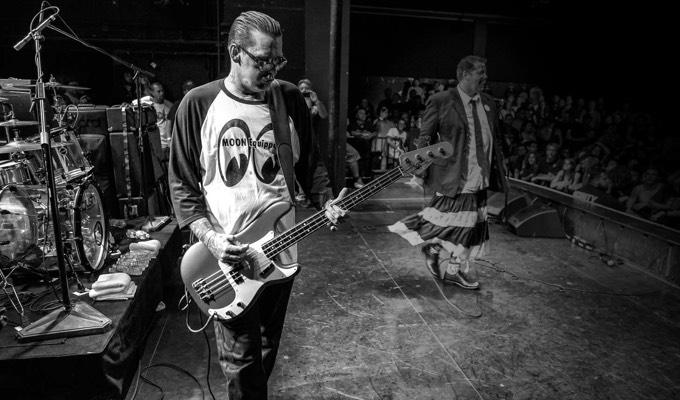 To say Mike Roche, bassist of the band, True Sounds of Liberty, had humble beginnings is an understatement.
Continue reading 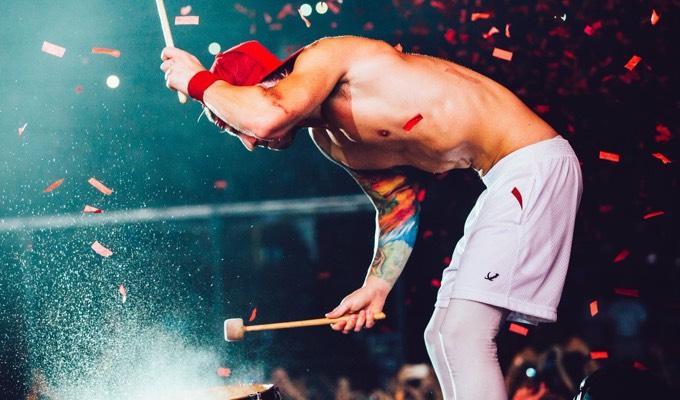 John Graefe has tattooed some serious celebrities in his 22 years in the business, including Twenty One Pilots star, Josh Dun.
Continue reading