Tattoos can change your life.

Tattoos can change your life.

In more ways than one. Just ask Carlos Alvarez, one of our talented tattoo artists at the Hart & Huntington Las Vegas tattoo shop.

He was born in Santa Ana, Orange County in Southern California, spent his teenage years in San Bernadino and Riverside, but grew up in Arizona.

I lived in a Mexican house. My grandma and uncle lived with us, and we had one TV. I grew up speaking Spanish and it was nothing but novellas all night, so I’d grab some paper and draw the side- view of my family’s faces while they watched.

Like most kids in the neighborhood, he got into some trouble.

But drawing kept me from getting into serious trouble. It’s always been a cheap thing to do. All you need is a piece of paper and a pen or pencil.

And it doesn’t matter your mood: you can draw when you’re happy, pissed or as a distraction when you’ve done something bad.

Carlos still remembers that first moment when he realized he loved to draw.

I was in school, and we had to draw the food pyramid. I drew it as a house and won a prize for it. That really got me going.

At the time, it was mostly just bikers, military and convicts that got tattooed. The only other person Carlos knew with ink was his father.

It was taboo at the time to have tattoos, but since my dad had them, I knew I wanted some when I grew up.

Carlos saw a friend get his first tattoo when he was a teenager—a regular stick-and-poke.

It was a prideful moment for him to get his last name tattooed on his body.

Carlos’ interest in tattooing developed from there. It wasn’t until a random run-in with another neighborhood kid that he started to get really into it.

This kid came up to me on the street and asked me if I had any remote-control toys. He wanted to make a tattoo machine with them. I brought him a toy that had two motors and told him I’d give him one if he let me see him make it. Then my curiosity got the best of me and that’s where it all started.

He started tattooing for fun. He’d do free pieces on his friends, charge $5 here and $10 there when he got a little better. And it started to add up.

It was a positive skill I learned. Every time I got into trouble, I’d use that time to improve my tattoo and drawing skills.

I met this guy named Jeronimo who owns a shop in California. We started talking and hit it off. He put me up to what I needed to do to transition from homestyle to pro. I also met a guy named Roman and often hung out at his tattoo shop. It was a networking opportunity for me that motivated me to learn more and more.

Now that he’s a pro, and an insanely good one at that, Carlos has found a home at Hart & Huntington in Vegas and honed his skills in Black and Grey Realism.

My style has evolved in many ways over the years. I went from using a single needle to 23 needles; from a machine that weighed half an ounce, to one that weighs a pound. Pivoting over time has allowed me to learn many styles. I do color too, but I love the realistic aspect and the challenge that comes with Black and Grey.

In fact, he’s become quite the perfectionist.

I’m my own worst critic. I want every piece I do to be perfect and look real. A tattoo is the only thing that you buy and take with you beyond the grave, so it’s a great feeling to achieve that for my clients. 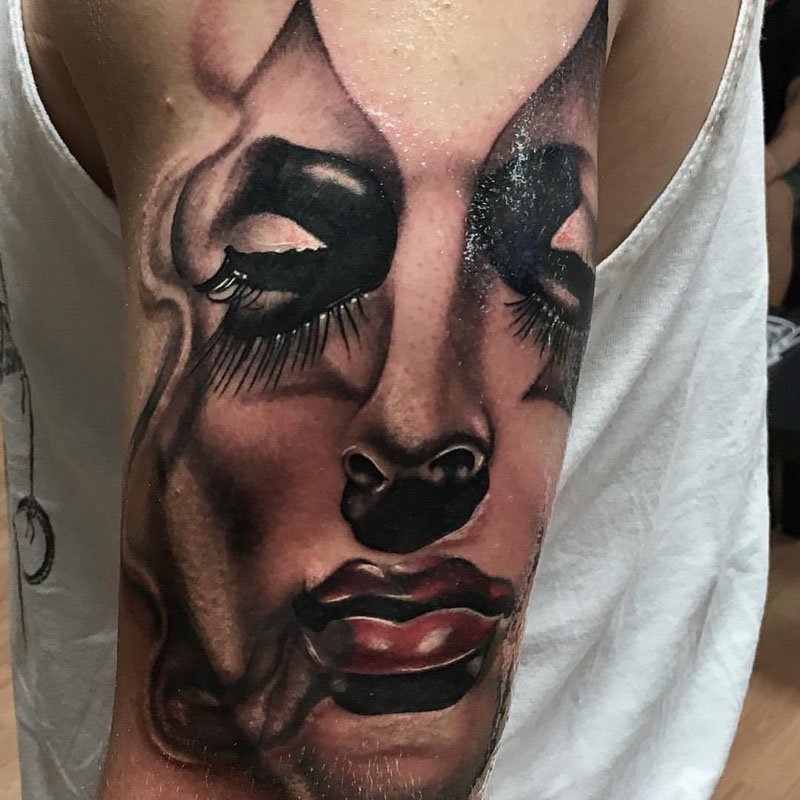 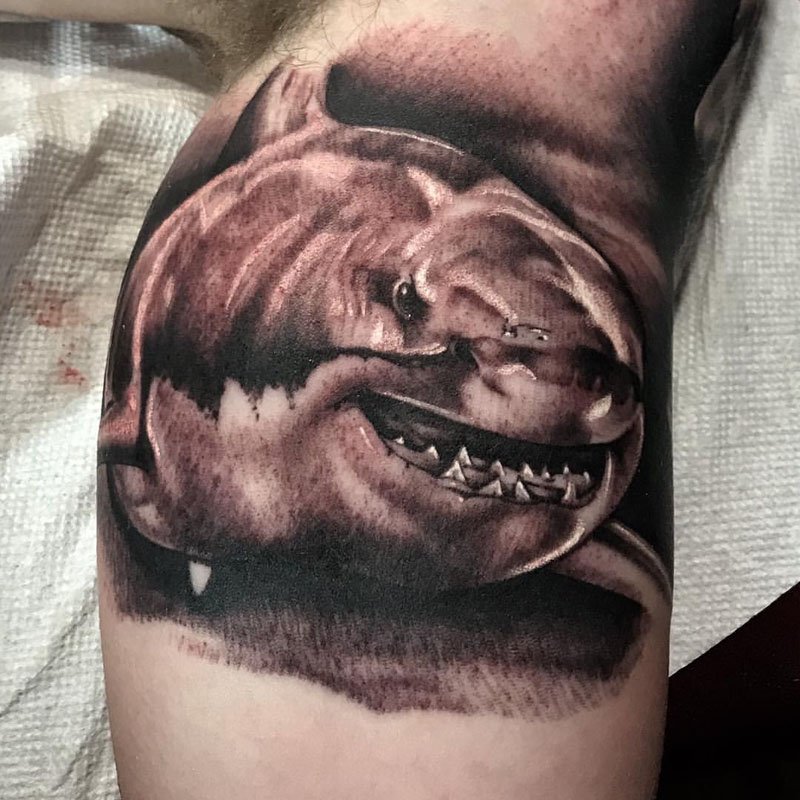 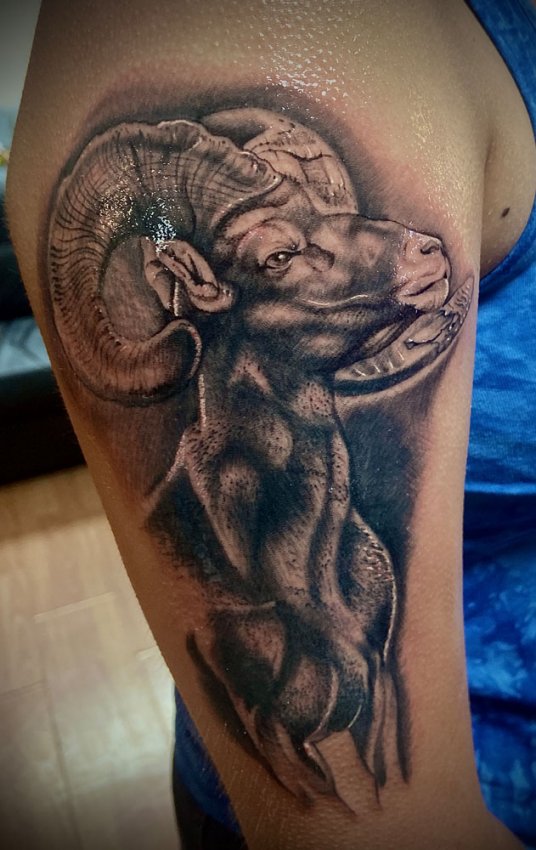 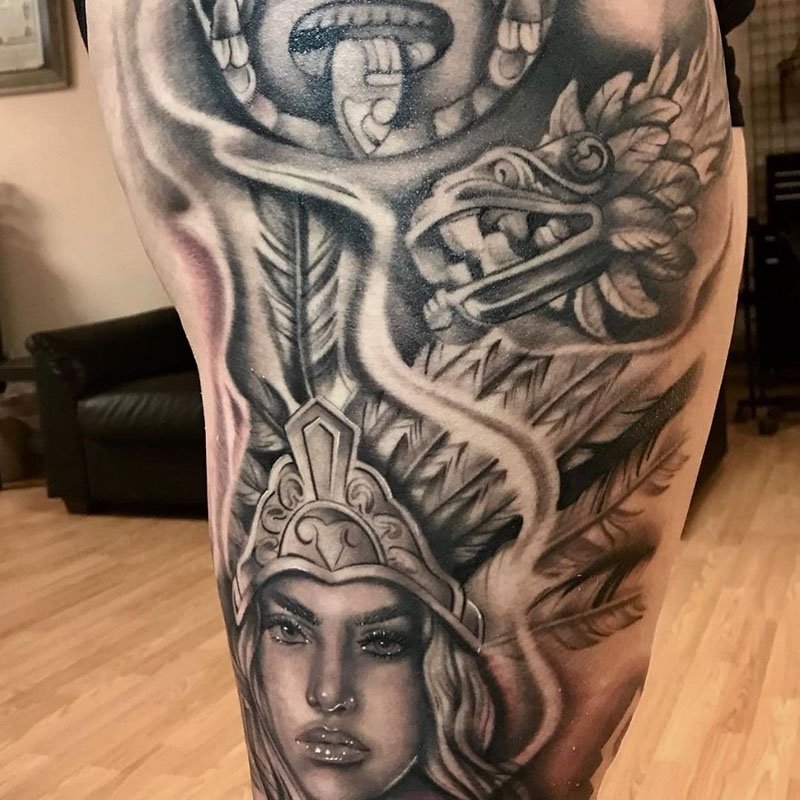 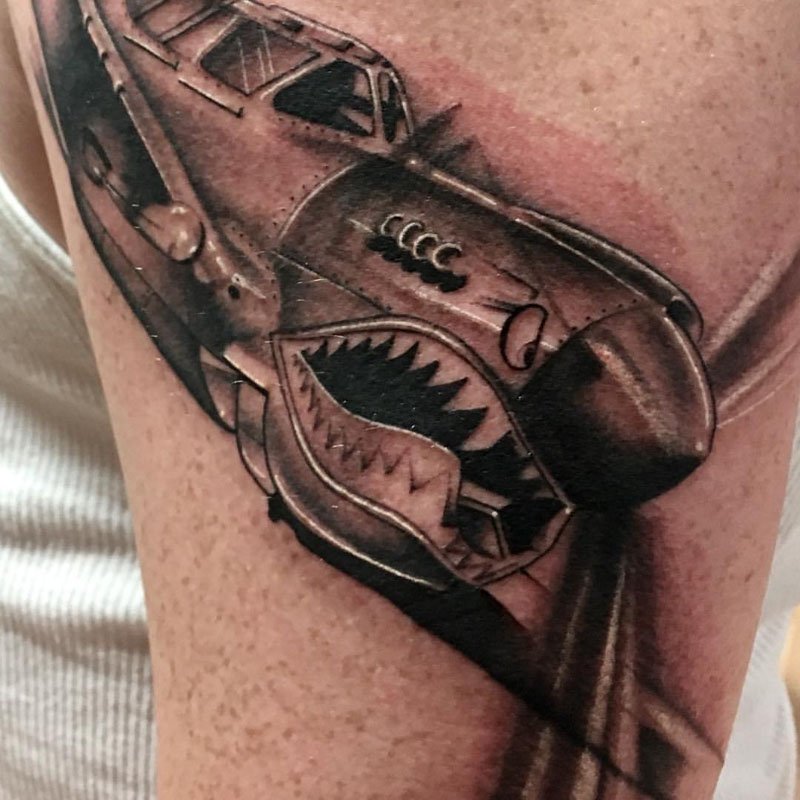 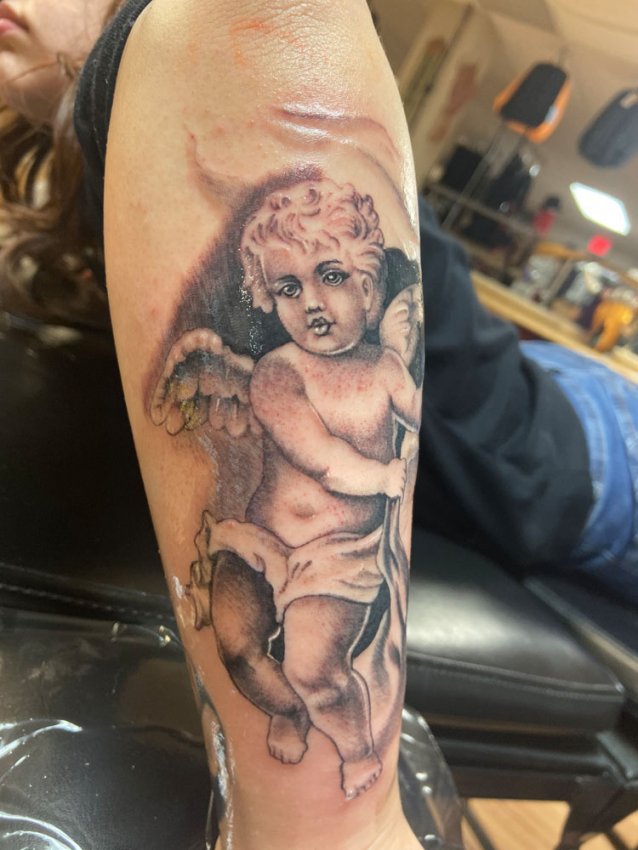 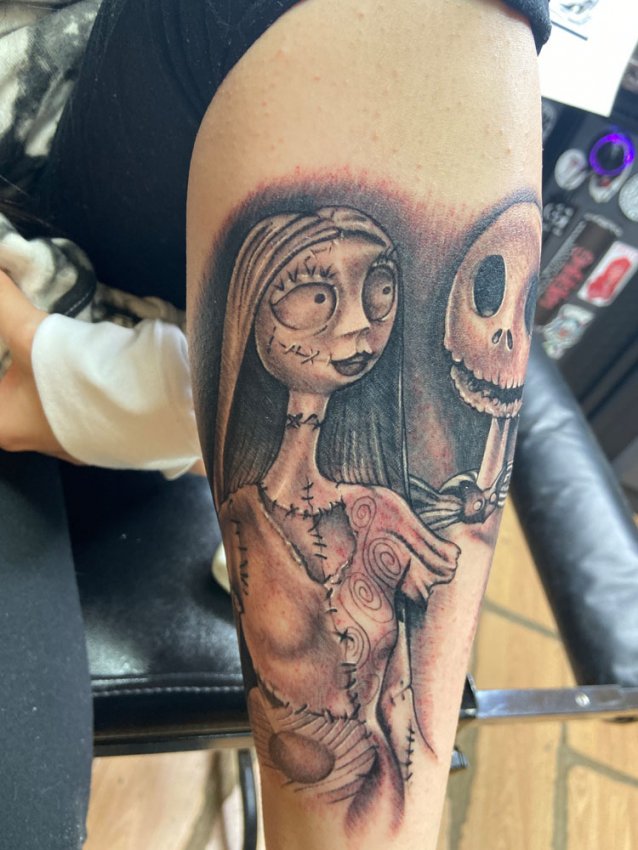 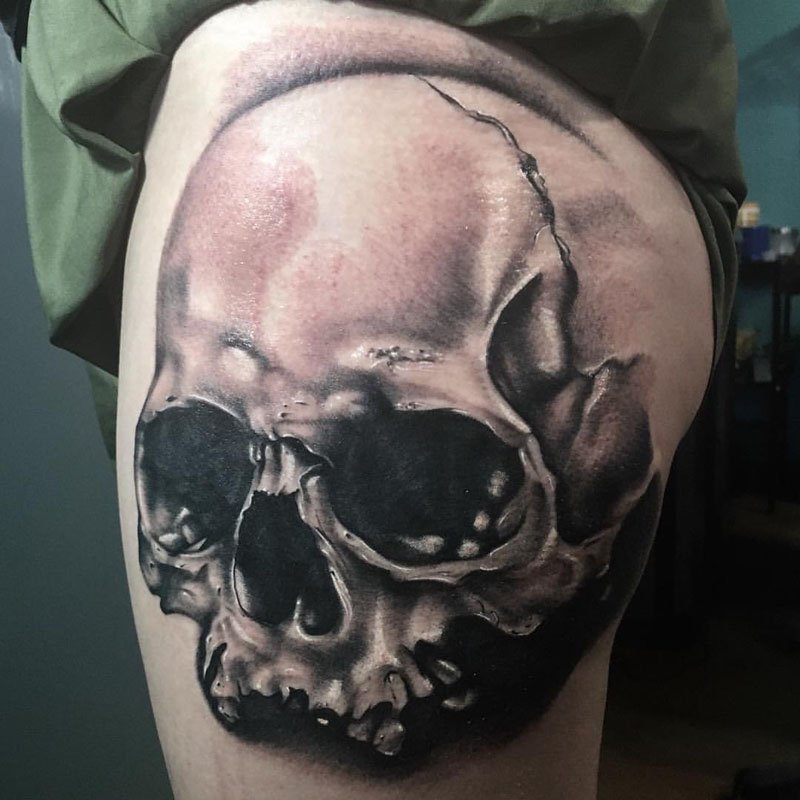 And he does, time and again.

Getting a tattoo changes your life. I’m honored to be the person to do that for someone else. I get to put a piece of me on them. It’s a great way to be remembered.

It doesn’t matter whether the tattoo is commemorative or a Vegas souvenir. Carlos wants his clients to feel comfortable with the decision they’re making.

Your tattoo should make you happy. It even has the power to heal.

His favorite piece he’s worked on—hands down—is the tattoo he did on his firstborn son, a 24-year-old sheriff’s deputy and the first to graduate high school in the family.

I gave him a full-arm sleeve of Greek mythology: a Pegasus on his wrist, minotaur on his forearm, the Pantheon on his elbow and Poseidon with a seahorse and trident at the very top. It’s the best one I’ve ever done. My kids are what inspire me to get up and do better every day. 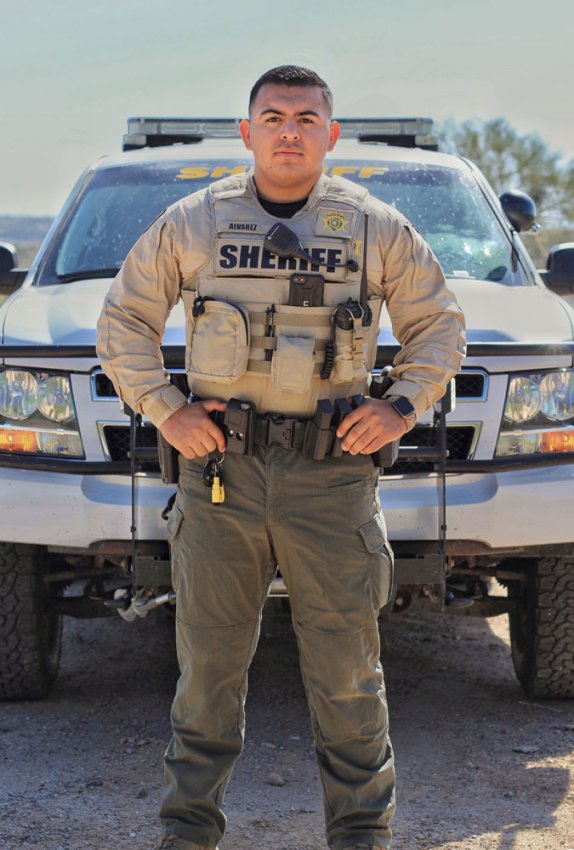 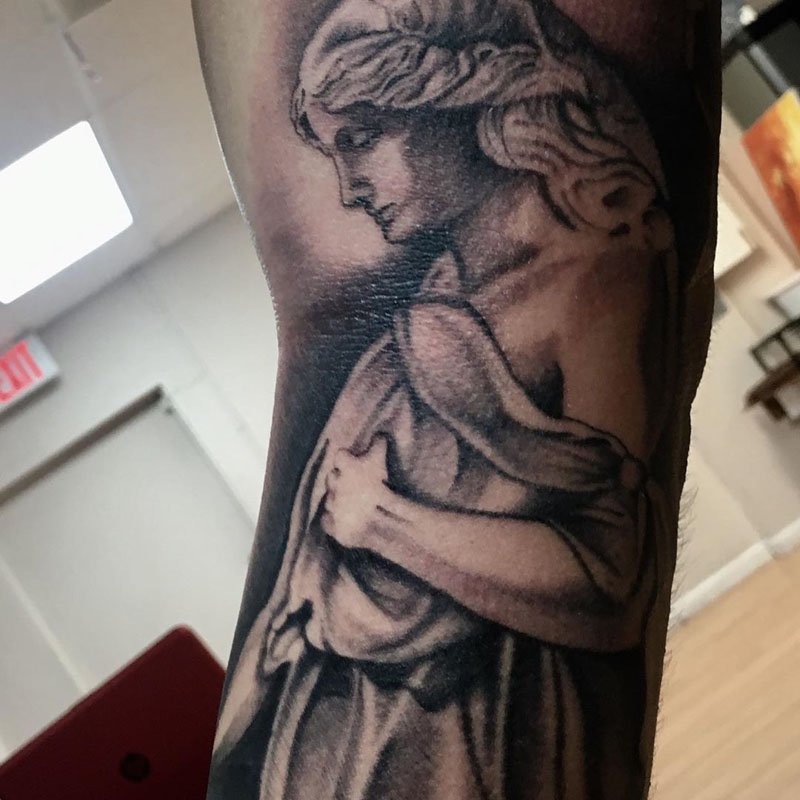 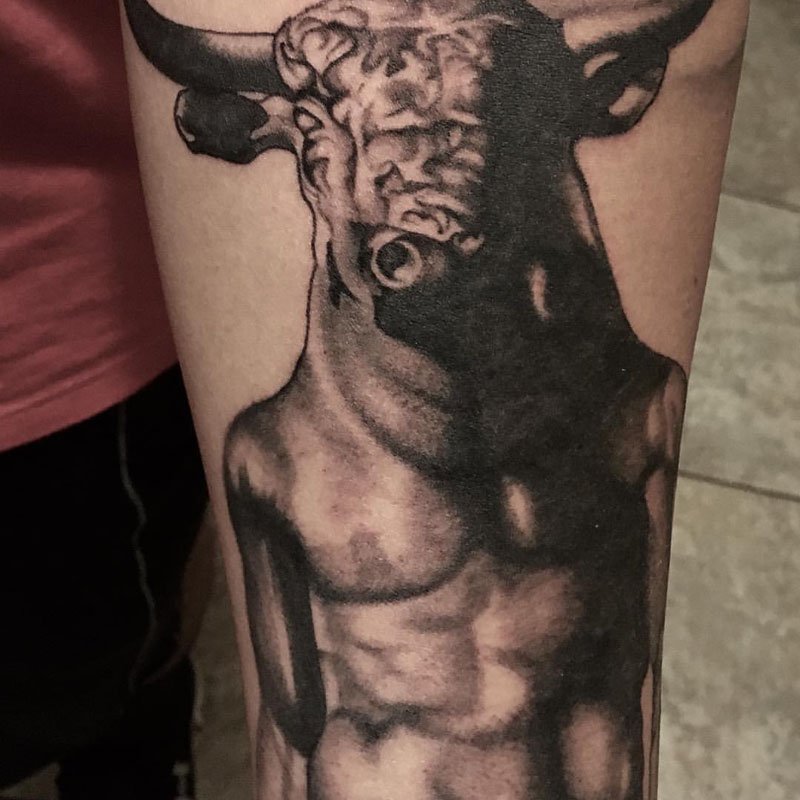 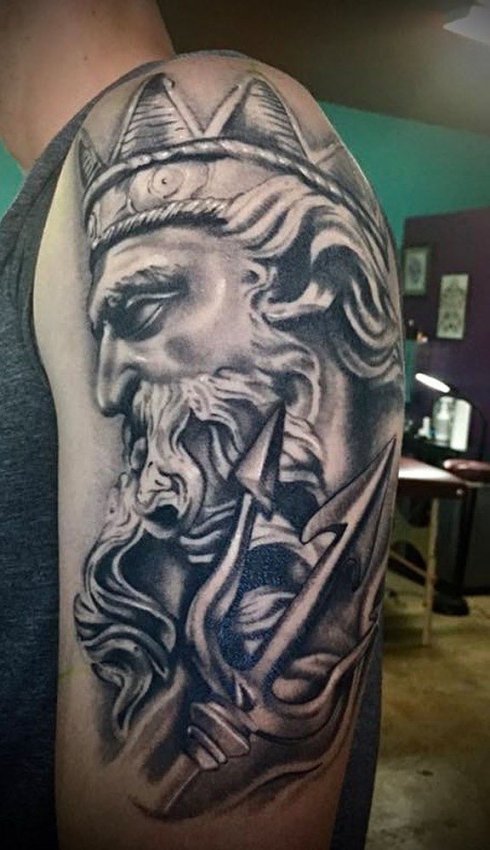 As for his own collection, he has a few that are very meaningful to him.

My daughter did the most perfect heart on my left hand. On the other side she did a cross on my finger that hurt so bad. It’s crooked and blown out now, but it’s perfect to me. My eldest son tattooed me on my legs a few times, all of which are messed up. But they’re all special to me because he did them. My youngest son wants to be a tattoo artist now too. He wants to get an official apprenticeship here in the next few years.

There’s no better place to learn from the best, and be inked by the best, than Hart & Huntington.

I felt intimidated when I first joined H&H, even though I knew some people here at the time. It’s the most beautiful tattoo shop I’ve seen and the best crew. Everything is so organized, and the people are the easiest to work with.

It’s a high-end shop with a high-end experience. I intend to be here for a while. It’s going to be hard to get rid of me! 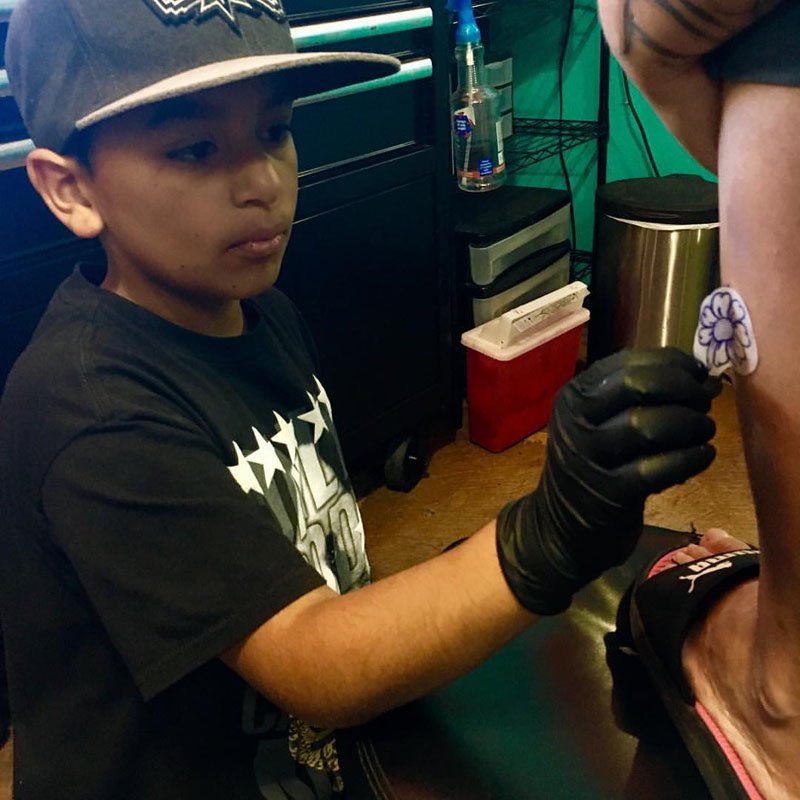 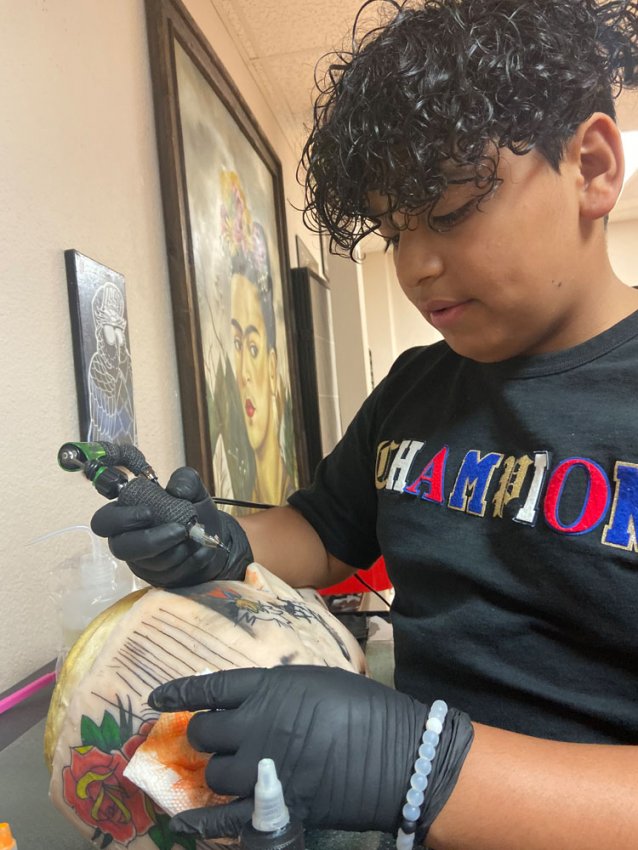 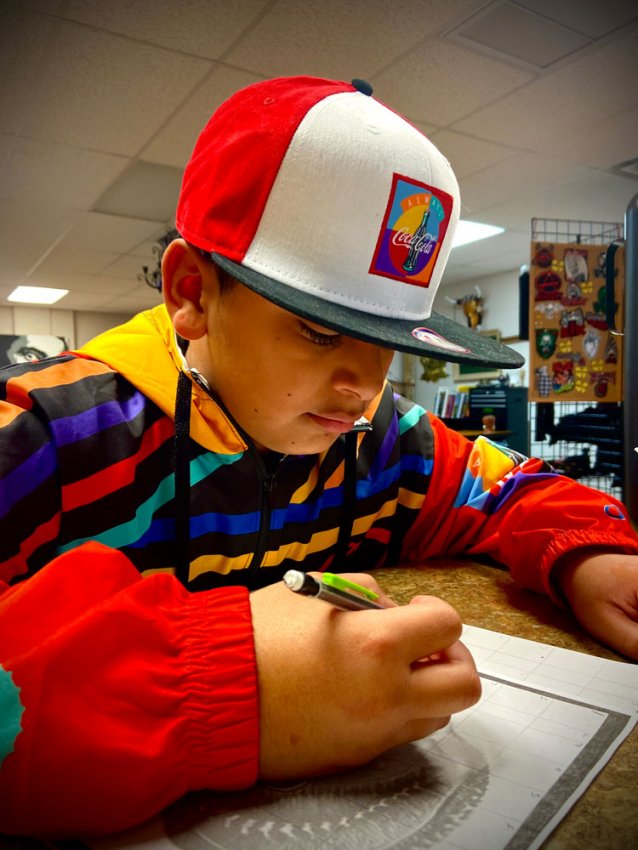 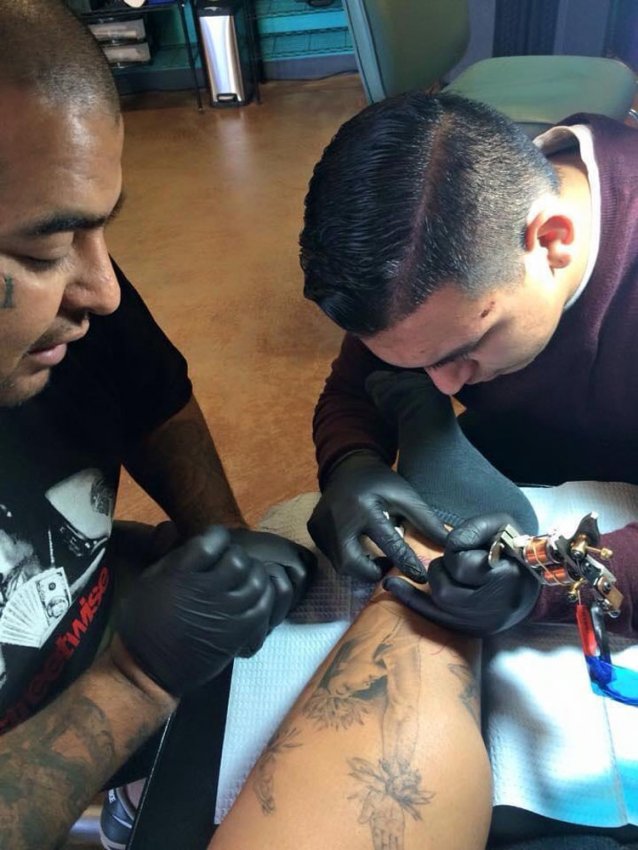 The best part of Carlos’ journey?

The fact that my career as a tattoo artist has motivated a whole lot of my family to follow in my footsteps. I was the first to tattoo professionally. Now my brother and cousins tattoo as well, and my kids are into it. It’s awesome.

Whether you wear them or create them, tattoos have the power to change your life. For the better. 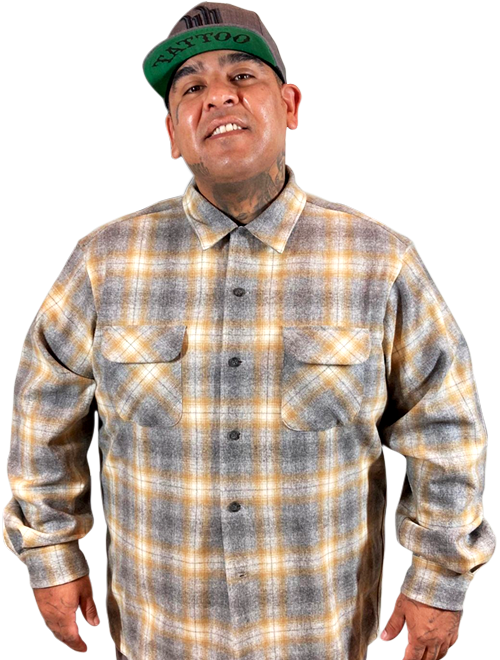 Request an appointment with Carlos

The pursuit of happiness.
That’s what gets Hart & Huntington tattoo artist Eric Alvino...
Inside out.
The business. The books. The bottom line. As manager of Hart...
Twenty Two Years. Twenty One Pilots.
John Graefe has tattooed some serious celebrities in his 22...