Healing through art, one piece at a time.

Tattoos can become a meaningful way to honor a person or a moment in someone’s past.

Healing through art, one piece at a time.

For Erik Baluyot, he was introduced to art early on in life, but at the time, it was just something he enjoyed doing.

I was around 5 when I started looking at my brother’s sketch books and copying his drawings. I did a lot of animals, eagles, birds, and wildlife types of art. I would always look at photos of family members or of people in magazines and I’d try to redraw their faces.

As a teenager, Erik started to take a personal interest in tattoos. 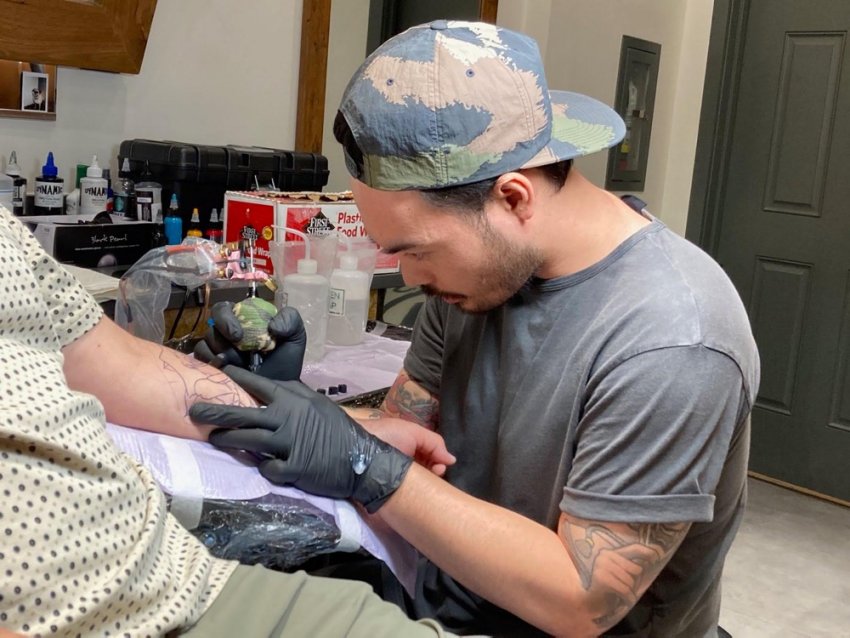 Being in LA, people are always tattooed. Looking at musicians that I liked and seeing their tattoos, I thought they looked cool and I knew I wanted to get some. I pictured myself looking like that as I grew up.

Soon, he realized he had the potential to turn this hobby into cold, hard cash.

I had a friend getting a lot of tattoos done, and he would draw and paint as well, so I was kind of influenced by him after seeing all the stuff he was getting. Somewhere along the line, it sparked more of an interest in doing it for a living.

Erik knew it was going to take more than just an interest in tattoos to get his foot in the door when it came to the tattoo industry.

I sought out information on how to get into the industry and how to learn. I found out that drawing and painting helps you get an apprenticeship, so I actively tried to make a portfolio and went around to shops seeing if I could get hired and eventually, I did.

At the beginning of his apprenticeship, he wore a lot of different hats while learning the ins and outs of a tattoo shop.

I’d clean, scrub tubes, buy people lunch or just do errands. But I also learned a lot. I learned about how to set up a tattoo and how to talk to clients, make stencils, set up machines and all the things you need to perform a tattoo.

He was able to learn about different styles of tattooing. That’s how he discovered his own unique style.

I originally just wanted to do traditional or neotraditional, but now seeing all the different styles I’ve seen helped me branch off. 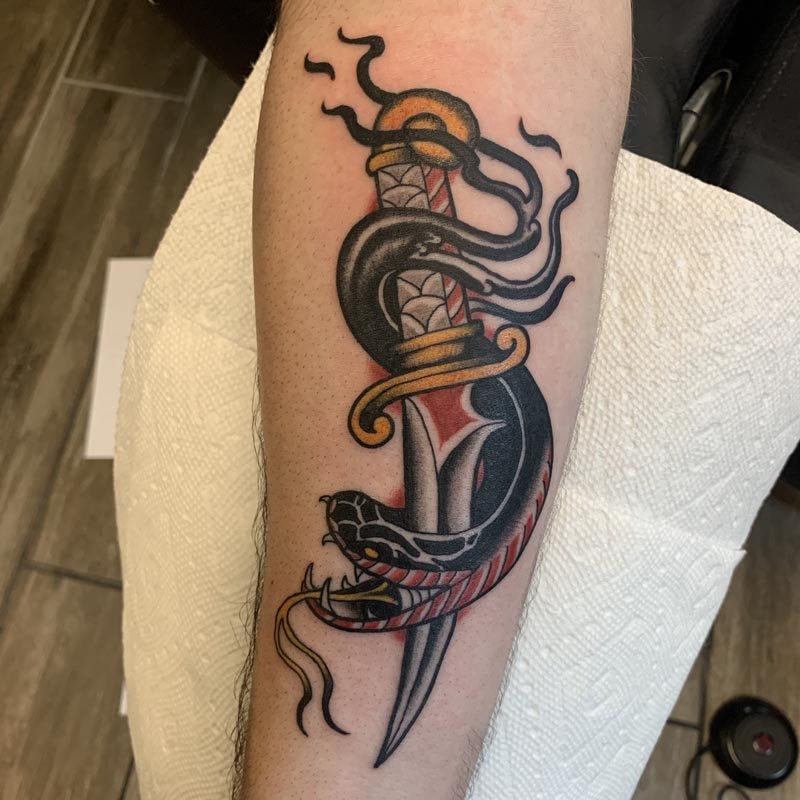 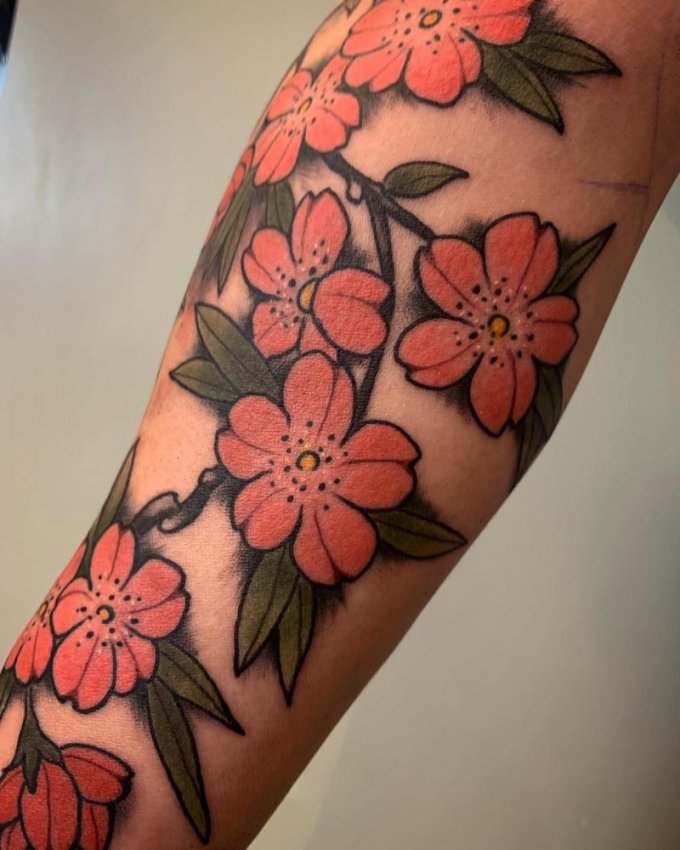 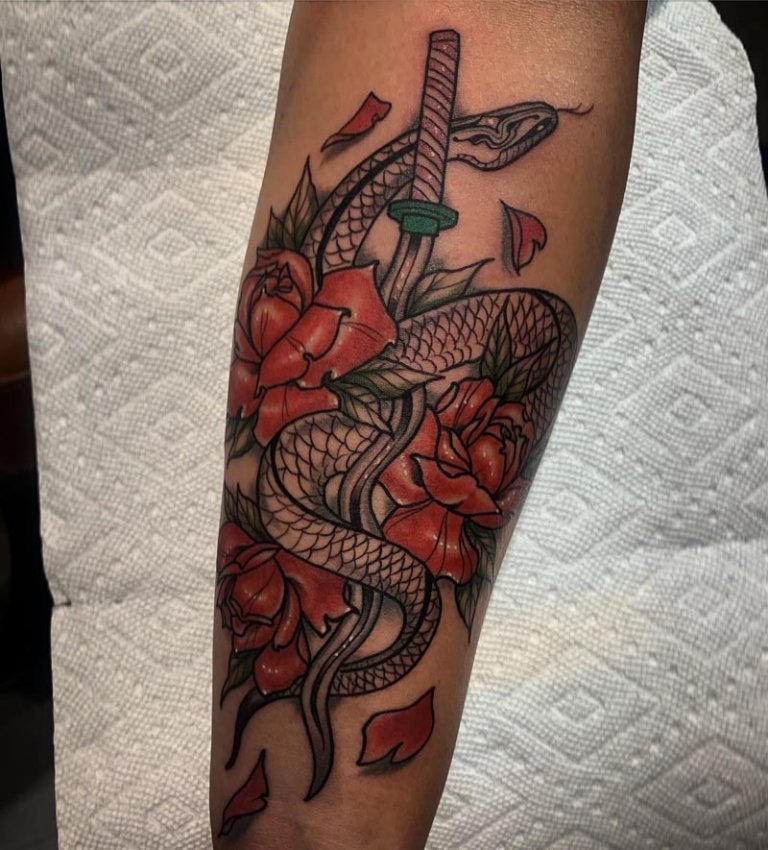 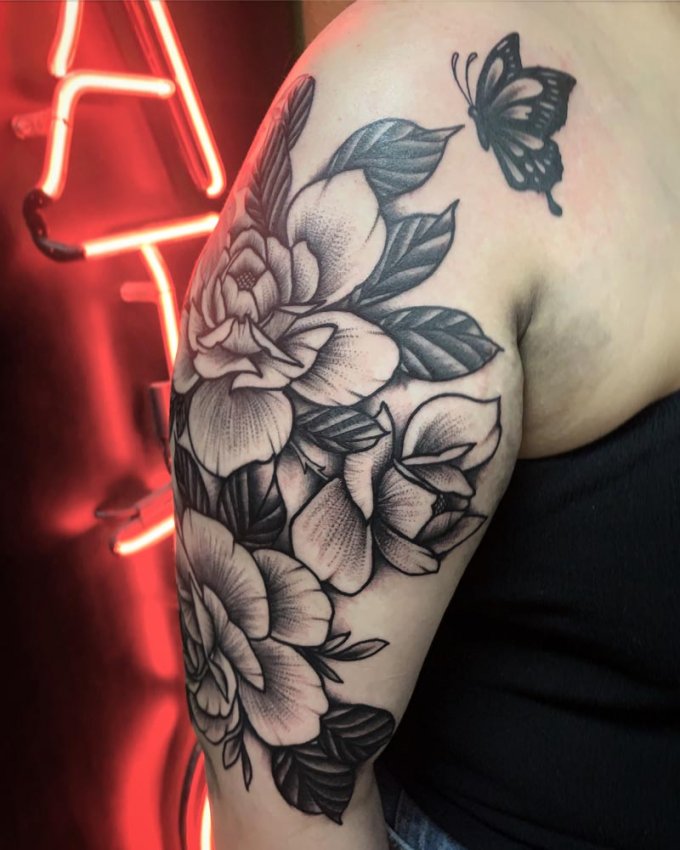 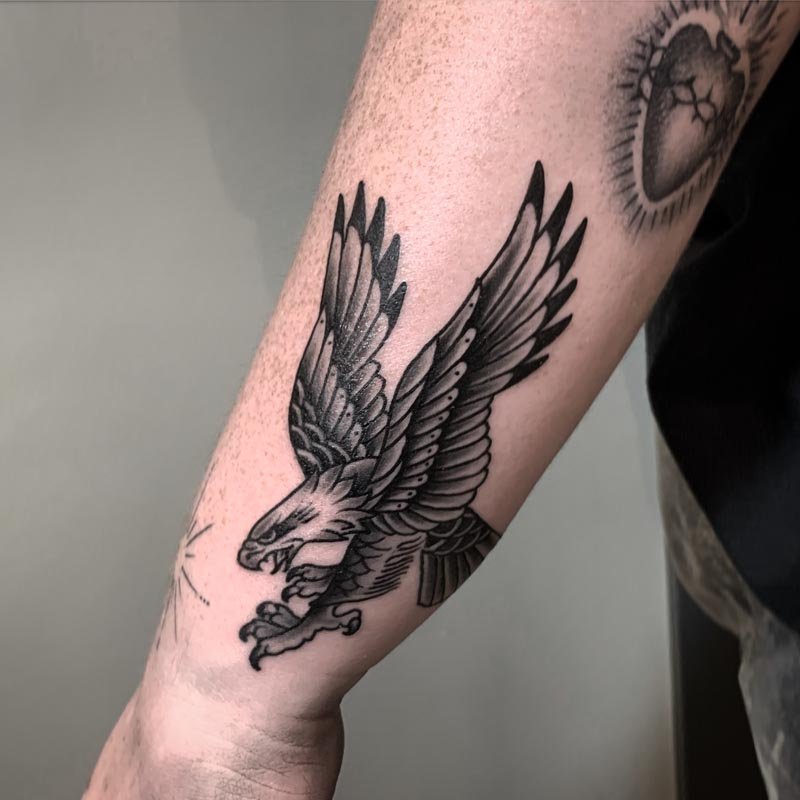 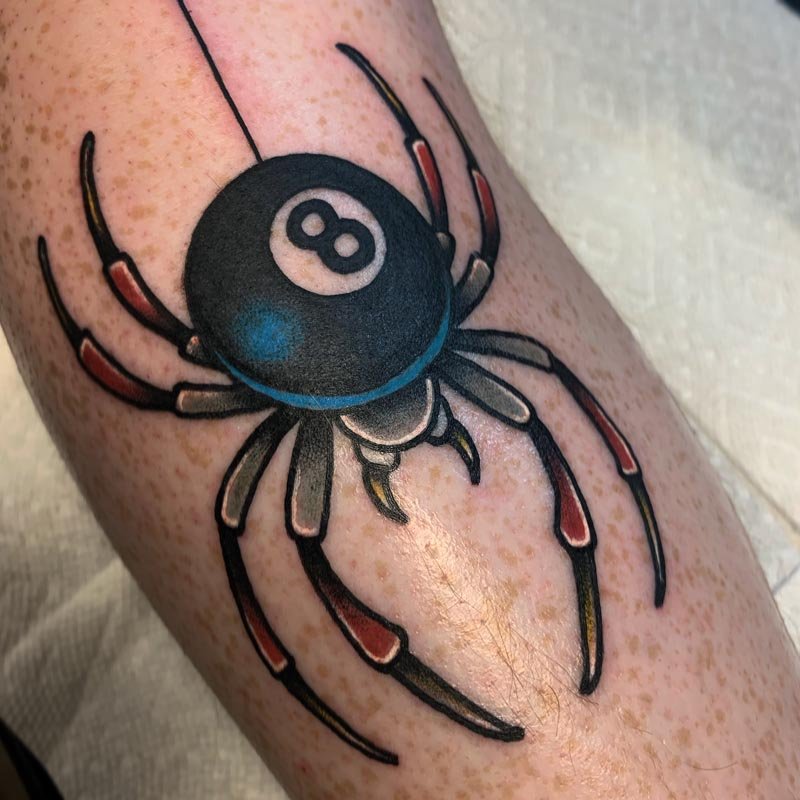 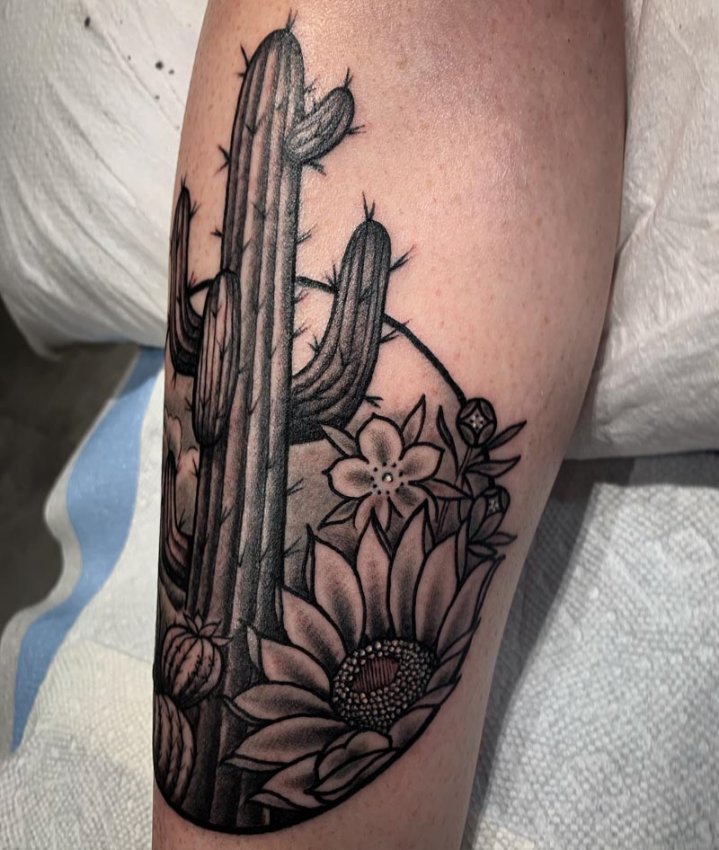 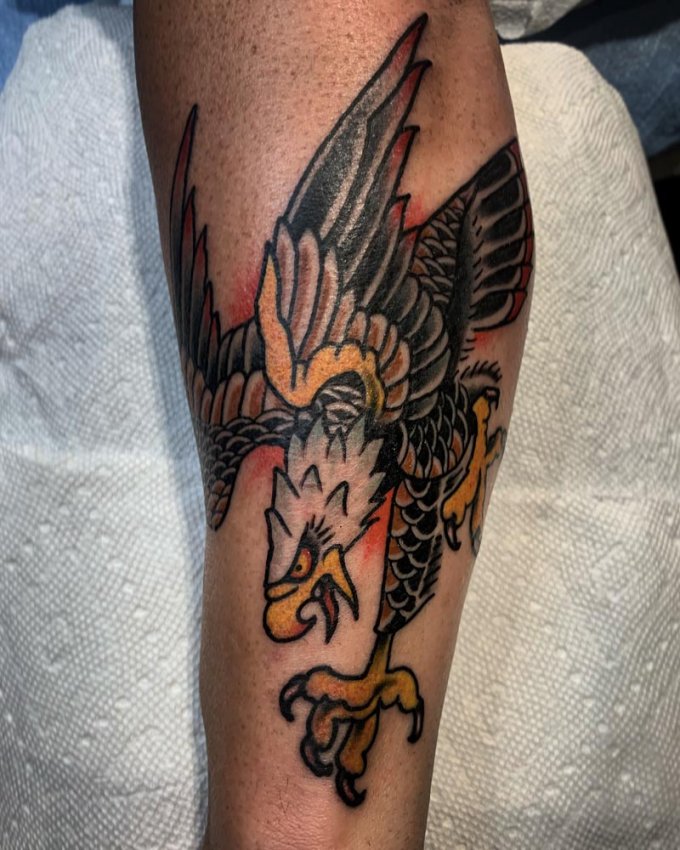 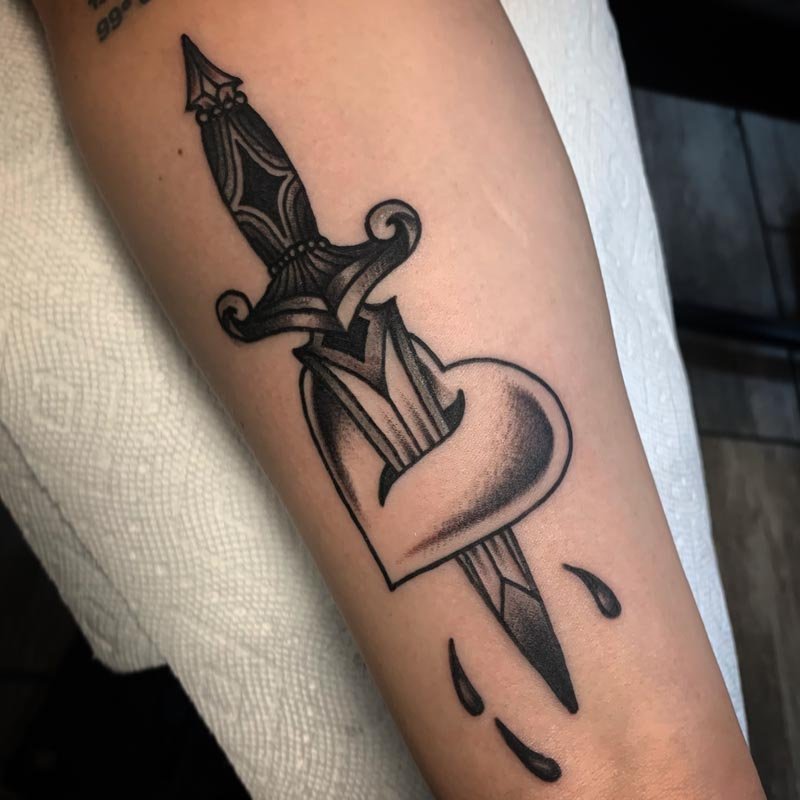 I actually like doing more illustrative work and sort of black and grey pieces. With traditional, there’s so many rules and there’s only so many kinds of motifs and imagery to go off. But being more illustrative, you can kind of make it up and do your own thing while sticking to the traditional rules of tattooing, like bold lines and using lots of black.

After years of professional experience, Erik is now able to not only create incredible art pieces for his clients, but he’s also able to give knowledgeable advice when it comes to an idea that a client may have.

When people ask for finger tattoos, I always show them before and after photos. They’re usually fallen out, blown out and don’t look nice over time.

Anytime someone comes into Hart & Huntington Las Vegas with a special request, Erik knows just how meaningful his work will be.

A lady came in who already had a rose for one of her kids that passed and sadly she had another son pass away, so she wanted to touch up the old rose and have another one added. After I finished, she looked at it and started crying but happy that she has something to commemorate both of her kids with.

That made me feel really good about what I do because it’s something that they can take with them everywhere to remember a family member or a certain part of their life. 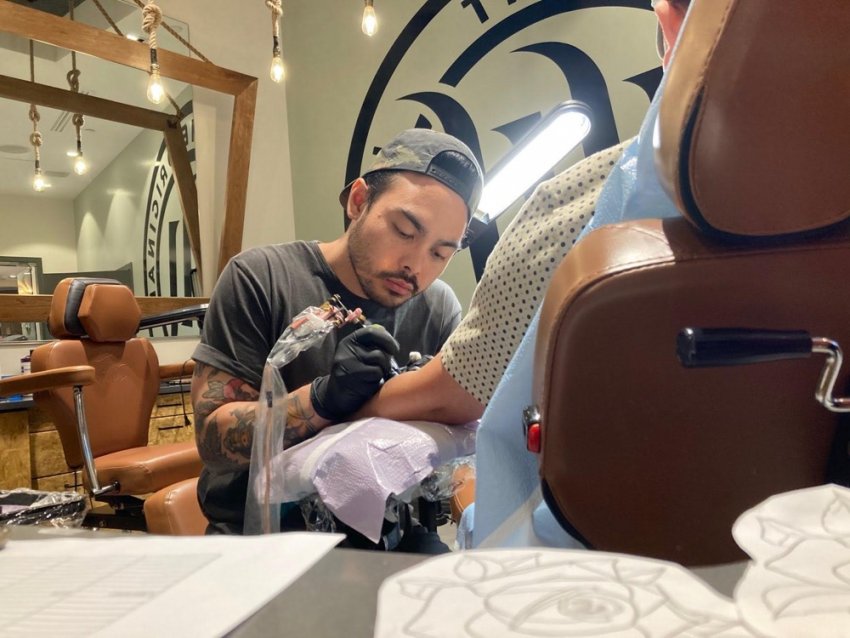 He even has his own tattoo that holds sentimental value.

I have a rose with a skull in the bud of the rose and it was done by this older tattoo artist that I worked with. He passed away about 6 years ago, but during my apprenticeship he really took a liking to me and kind of helped me out and showed me a lot as far as art and tattooing. I felt like we bonded, and I get most of my knowledge and style from all the things he showed me. So, every time I look at this tattoo, I’m reminded of him and all the things he taught me.

One of the most important lessons he learned still sticks with him to this day.

I learned to have a passion for the art and the craft of tattooing, not just to do it for money.

It’s a hussle. It’s not guaranteed that you’re going to make it in the industry, even if you do an apprenticeship and go through the right steps. You have to keep working at it, working up your clientele and building up your skills.

Working at Hart & Huntington has transformed the way he views tattoo shops for the better.

Working at H&H is great. It’s given me a big break. I feel like I don’t really have to stress so much on certain things now and I can focus all my attention on doing a quality tattoo, which I’m really happy with. It’s a different experience, but in a good way. I came up in street shops and H&H is more structured, which sounds like a bad thing but it’s really not. It’s just more organized and less like a mom-and-pop shop. It’s more professional. 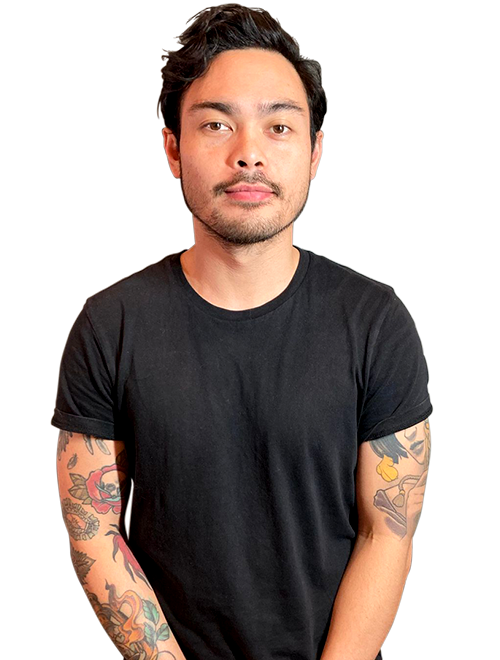 Request an appointment with Erik

Not the same old story.
Lacey isn’t new to the game. She’s been tattooing since...
It’s not easy to turn a hobby into a…
Hart & Huntington Tattoo Artist TJ Denton knows exactly how...
On the darker side.
At H&H Las Vegas, Mike Zimmer specializes in neotraditional...